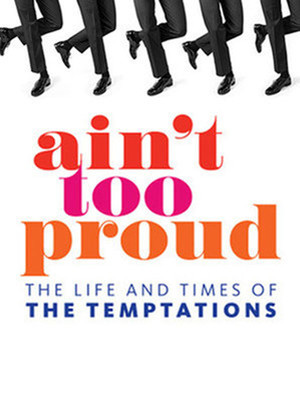 Ain't Too Proud - The Life and Times of the Temptations

Why See Ain't Too Proud - The Life and Times of the Temptations?

As one of 2019's most sparkling Broadway musicals Ain't Too Proud - The Life and Times of the Temptations hits the road for its first national tour in 2020! Garnering twelve 2019 Tony Award nominations (one of the season's most nominated productions) Ain't Too Proud garnered praise from the critics for its sublime performances and refreshing telling of how one of the world's most successful bands came to be.

Full to the brim with some of The Temptation's most iconic hits (My Girl, Papa was a Rolling Stone, Just My Imagination to name a few), Ain't Too Proud follows the rise of the five-piece from Detroit, from their humble beginnings and dud starts to international superstardom! Not a musical to shy away or sugarcoat some of the group's more distressing tales Ain't Too Proud is a glistening musical which celebrates life's triumphs and will leave you singing all the way home.

WHAT IS AIN'T TOO PROUD ABOUT?

Formed by five young guys from Detroit, vocal group The Temptations struggled for years to land a hit. Things turned around when they signed for Motown, and with legendary songwriters like Smokey Robinson writing them tunes, the group rose to become one of the biggest names in American music. But their path to superstardom was far from smooth sailing, with clashing personalities and political disagreements nearly tearing the group apart.

The Temptations are still performing to this day, with Otis Williams the sole remaining original member.

Two hours and 30 minutes, including intermission

Please note that the images used are from the original Broadway production and may not reflect the current cast.

Did a quick NYC trip for a few days and loved the play!!! The dancing... more

Sound good to you? Share this page on social media and let your friends know about Ain't Too Proud - The Life and Times of the Temptations at Shea's Buffalo Theatre.